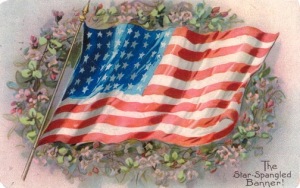 Talk to anyone who is not a Christian, and they would probably say that we are crazy. The bible tells us that the world thinks we are fools, but I’m not even sure that that is a strong enough word. We are probably more like psychopaths to them. No wonder, because everything that we think, say, and do, is SO contrary to the world. It’s like we’re from different planets, and yet somehow both stuck in the present on this planet together for an undisclosed period of time.

How are we so different? Well, let’s just look at one minor example of what are views are on “freedom”. What’s the first thing that comes to your mind when you think of this word? I don’t know about you, but for me the United States of America comes to mind. We are a country, a people, a culture, that screams, lives, eats, breathes, gives our lives for, and fights for freedom like no other people I have ever learned about in history. If it weren’t enough to declare a land of freedom for its citizens, we also fight around the globe for others to experience the reality of the ideal of a life of freedom. You can expect persecution, the loss of a job, restricted rights, and a whole list of other punishments should you choose to impose on the freedom of another, or restrict their right to do whatever they like. Freedom tells me I can drive however fast I want on the freeway, and can sue whoever dares to cut me off and causes my speed to go below 75 mph. In contrast, a Christian understands the concept of laying down our rights for the benefit of another, and the glorification of our Father in heaven. A Christian desires to drive within the safe speeding limits set forth on our freeways, willingly lets others merge in front of them, and is not bothered by the fact that they are now driving very slowly behind a car just cruising along. The bible is filled with such commands for us like: submit to leaders, turn the other cheek, go the extra mile, and lay down your life. The battle Americans wage everyday for the fight for the right to freedom for themselves and others is vastly different from the battle Christians wage everyday with their flesh to give up their rights and count another as better, and greater than themselves. These two lifestyles could not butt heads any harder.

I used to think that it would be impossible to explain to someone why I choose to wage a battle with my flesh every day to lay down my rights. But the Lord was gracious to give me a little glimpse of what that is like. Where did I find this example? I had to look no further than the piercing glances from a four-legged creature eagerly waiting for me to finish this post with a wagging tail so I could focus on her. That’s right; my guide dog puppies have shown me how to exhibit such joy in the midst of a restricted lifestyle.

This idea dawned on me one day after I called one of my pups back inside the house from exploring and romping around loose in my backyard. In that moment, they are about as free as they ever could be. Sure I am monitoring their behavior to make sure they don’t inhale every stick and stone, plant and flower in my backyard. But they are off leash, running sometimes at 100 mph like a race car on a track, as free as a bird. As much as my pups enjoy spending time being “dogs” in my backyard, the moment I bring out the leash, call them back to me, and we head back inside to get ready to run some errands, they run even faster back into my arms then they did roaming free on their own. Their tail wags even faster when I clip my leash on their collar, restricting their freedom to do what they wanted. In that moment I realized, my guide dog puppies in training would rather spend a day of “restriction” with me, then spend the whole day running around loose and free in the backyard on their own. This trait is a mark of a guide dog. Some pups could care less and run away when the leash comes out to restrain them, but those dogs usually don’t end up with a lifelong career as a guide.

The rest of that day, I spent contemplating how I react to the restriction of my freedom and my rights. Am I ecstatic like my pup when the leash of restraint comes out, or do I run the other direction dreading the loss of my freedom? Would I rather relinquish all my freedom and my dreams to God and spend time by His side, or run around on my own doing my own thing?

If we’re honest with ourselves, we will realize that the freedom we fight for can never be attained. You see, we are all slaves to something. Despite what you might think, even in the United States, slavery has not been eradicated. Whether someone is forcefully enslaved by human trafficking, an alcohol addiction, or a slave of righteousness, no one is free. We may be striving for freedom, but none of us have it. In the bible, the apostle Paul spoke to such individuals in Rome who though they understood they were great sinners; that Christ is a great Savior; and that their freedom in Christ and His unending grace was all-sufficient for them; they assumed they could then live a life completely free from all restriction. The apostle Paul’s response to them is classic. In Romans chapter 6 beginning in verse 15, I can just imagine Paul yelling with force at the top of his lungs as he exclaims, “May it never be!”. The remainder of that chapter is an explanation of why Paul felt so strongly about this topic.

I can remember when I competed in debate tournaments in high school, there was always that one debater whose value to support his or her idea in their case was the word “freedom”. Those rounds never went well for either the debaters or the judges. They usually resulted in a confusing topic of anarchy vs. freedom with restriction. I even fell into that trap once, but repented of my sin, and vowed never to have the value of freedom again in any of my cases. Syndrome in the Disney/Pixar animated film “The Incredibles” has a line in the movie that has stuck with me since I first watched it. He states, “When everyone is super, no one will be.” Since hearing that line, I have often replaced the word “super” with other words, and they fit just as well. The word freedom fits in their nicely too. Because when everyone is free, no one will be. I believe we are getting more glimpses as to exactly what this looks like in our society.

No one can be free, because everyone is a slave to something. When people think they have attained freedom, they are actually putting a restraint on something else in order to feel that way. Freedom is a tug-of-war reality that constantly gives and takes in order to attain.

I don’t expect everyone to believe the things I have written here. If you are not a slave to Christ, what I have just written will sound psychotic to you, because the Lord has not allowed you to see the foolish things the Christian culture believes and acts upon, with eyes born again in Him. I just felt a strong urge to share another beautiful example of the impact these precious pups have had on my life. They have not only made me a better person, they have left deep spiritual examples to me about different things that relate to my submission to my Lord Jesus Christ.